The first use of clock cards as a means of recording working hours was in the late 19th century, when a man named Daniel M Cooper invented the world’s first clock card time recording machine, called the Rochester Recorder.

A clock card or time card is basically a piece of rectangular card which has the working hours of the day and days of the week pre-printed on it, separated by horizontal and vertical lines. These areas on the clock card are used to keep a detailed record of employee working hours on a day by day basis.

Typically an employee would insert their clock card into a machine called a time recorder, typically made up of a clock, an insert area with a trigger and a method of printing time & date information.

Employees’ would usually have their own personalised clock card, which they would insert into the time recorder when starting work and then when leaving for the day at the end of their shift.

Each time an employee inserts their clock card, the time recorder machine prints the exact time on the card, this enables the company’s timekeeper to easily calculate at the end of the week, how many hours each employee has worked and then work out how much to pay them.

Back in the 19th century more people were beginning to work for large factories rather owning their own businesses, so more emphasis was put upon punctuality.

Organisations’ overheads in the way of labour, raw materials and transport costs needed to be closely monitored and analysed to maximise profits, consequently it soon became apparent how important accurate records of working hours were key to running a successful business.

In those days, all employees’ working hours were recorded in time-consuming handwritten logs and consequently mistakes were common place. A new and more accurate method of recording ‘hours worked’ was required and in the late 19 hundreds 3 separate time-keeping machines were invented.

On November 20th 1888, Willard Bundy, a jeweller by trade in Auburn, New York invented the Bundy Key Recorder. The Bundy Key Recorder was a mechanised time recorder which comprised of several type-wheels which were controlled by a clock movement. Instead of using clock cards, the machine was able to print the exact time on a pre-printed paper tape of when an employee had inserted their designated numbered key. The employees’ personalised key number was also printed so that each member of staff’s working week could be accurately recorded.

1888 was also the year when another kind of time recorder was invented. Dr. Alexander Dey, created the Dey’s Dial Recorder, a time keeping machine which had employees’ allocated numbers marked around a large dial on the front of it. Workers would move a pointer arm around to their number on the dial before pushing it inwards along a guide. This in turn would print an exact time next to their employee number on a sheet inside the machine.

These clock cards were printed with 7 equal ruled spaces for each of the week. Each of the 7 spaces was split into 2 areas; ‘IN’ and ‘OUT’ for morning and afternoon registrations. Each employee had their own clock card which they inserted into the recorder. They then pressed a lever to print the exact time, which would then appear in the correct space on their clock card.

In 1911 the companies created for the mass production of these first time keeping inventions combined to become part of the International Business Machines Corporation or what we know of today as IBM. By the 1920’s most factories and offices were using time recorder machines as a replacement for handwritten logs.

IBM’s first Time Card Attendance Recorders were basically wooden cases with a spring-driven clock and a type-wheel, and were manually wound print registration devices. Making sure the ‘IN’ and ‘OUT’ print was in the correct daily column was also controlled manually.

The Time Recorder Division at IBM continued to research and developed their range of time card attendance recorders. And it wasn’t long before they had the capability to automatically align clock cards into the correct ‘IN’ and ‘OUT’ position.

Indeed they could even position the time cards in the right day of the week and had a 2 colour ribbon system that could highlight overtime or late employees, directly on the time card.

In 1938 IBM developed the first fully automatic time recorder which had a system where each employee’s day to day attendance was marked up the time clock card and the days were spread horizontally across the card.

This revolutionary method made the task of calculating the time attended per week much easier and quicker.

Inside the time recorder machine was a device which enabled the machine to record by the minute between registrations, so a more accurate record could be kept of an employees’ attendance.

Time recorders and clock cards and still in use today, though with the advent of computer technology, a new generation of electronic time tracking solutions is now available.

Such systems require members of staff to enter a I.D. number, pass a magnetic swipe card over a reader or use a RFID (Radio-frequency Identification) tag near a receiver unit in order to identify a themselves with the time recording device. This advance in technology has removed the need for time cards in the time keeping process. Even so a lot of companies choose to use clock card time recorders.

Then typically the employee would then enter the data that should be recorded, i.e.

There are even machines called biometric time clock systems, which actually record the employee clocking-in or out by scanning their finger prints or identifying the size of their hand or the blood pattern within the hand for high security requirements. 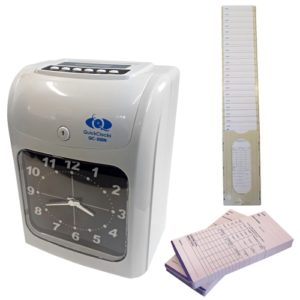 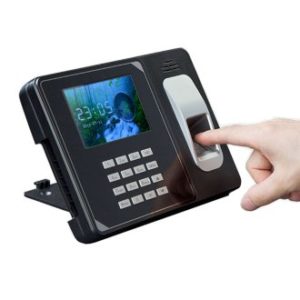 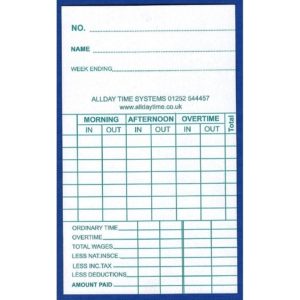 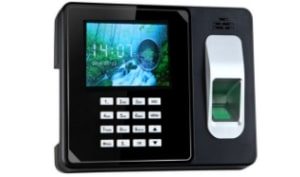